Oskar Fischinger and Norman Mclaren, who were pioneers of synchronisation of sound and visuals by painting shapes on film.
However the appearance of the computer with graphic capabilities brought endless possibilities to this field. The artists that followed them, and started to explore the possibilities of the computer and electronic systems for the generation of visual and sound, laid the groundwork of digital graphic synthesis.

This post collects the work on synthesis of sound and image in the early days of computer graphics.

He was a German film director and along with Hans Richter, Viking Eggeling and Oskar Fischinger was an early German practitioner of experimental film. He also worked with sound alone (Wochenende, 1930).

JOHN WHITNEY,Sr
He was one of the earliest pioneers in computer animation, he was the father of Motion Graphics (in fact in the 60s he founded a company named Motion Graphics Inc).
Whitney and his brother (James Whitney)  were interested in the combination of graphics arts and music and they developed devices and techniques for the synthesis of sound and image.
For his creations, Whitney used at first a custom analog computer that was adapted from an M-5 Anti-aircraft, an optical machine from the army, made for calculate and visualize missiles trajectories.

The following video is an excerpt from the “Computers: Challenging Man’s Supremacy” documentary, where Whitney demonstrates his analog computer.

VERTIGO ( 1958)
He worked together with Saul Bass in the creation of the title sequence for the Alfred Hitchcock’s film “Vertigo”.

“Larry Cuba is widely recognised as a pioneer in the use of computers in animation art. Producing his first computer animation in 1974, Cuba was at the forefront of the computer-animation artists considered the “second generation” — those who directly followed the visionaries of the sixties: John Whitney, Sr., Stan Vanderbeek and Lillian Schwartz.“ (LARRY CUBA web site)

Cuba is also one of the directors of IOTA centre, a research group and community that work in experimental and abstract film. 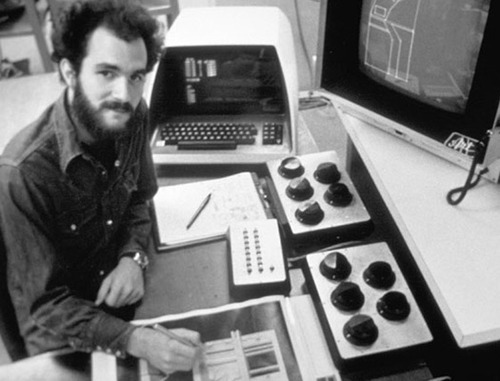 video you can see a “Making of” documentary made by Cuba where he explains the entire process. Sadly this video has been blocked by Youtube. Some automata-nasty-boot detected a piece of music that is copyrighted (the Star Wars theme maybe) and blocked this fundamental piece of history of Computer Graphics.
I founded it again in another video website, I hope that this one stays visible forever.

In 2009 Cuba was a guest speaker in “Punto y Raya” in Barcelona, and abstract film festival.
There he gave a retrospective of abstract film and visual music. A must see for everyone interested in the relations between image and sound.!

PreviousPrevious post: History of Augmented reality
NextNext post:History of information behind an Image